For example, let’s say test loads of 29.8 grains, 30.1 grains and 30.4 grains of a particular powder land at nearly the exact same point of impact when firing ladder tests at 500 yards (see graphic at left). That powder charge range will presumably be the optimal load range on which you concentrate in developing your load.

Each incremental step in the ladder test will be referred to as a “rung”. Each rung will be comprised of 1-3 rounds loaded identically. When there is more than one shot loaded for each rung, that rung will form a “group”. So, a “group”, as it is used below, means a set of shots that are all loaded identically (same powder charge and identical load parameters). The term “ladder-group” will indicate a group/cluster of many shots that includes several different rungs, or in other words, a cluster of several groups.

This similarity in point of impact between sequential shots (looking only at vertical separation and ignoring horizontal POI shifts due to wind) will reveal a powder charge range that should shoot to nearly the same POI independent of velocity differences. Well call this the “accuracy window”. In the example above, the accuracy window would be 29.8-30.4 grains of you test powder (given that all other load variables remain the same). This window may represent about a 30-50 fps velocity spread, yet when groups are fired using loads from each end of the accuracy window at 100, 300 or sometimes even 500 yards, the groups will often overlap even though they are separated by more than 0.5 grains of powder. (NOTE: the graphic above left simulates the results of testing at 500 yards.)

Several people have previously published their version of a ladder test; I have no doubt their methods work for those shooters. However, I have enhanced and modified the commonly-used ladder test to make a unique procedure that has delivered very good results so far. Results have been repeatable with the same rifle, and other shooters who have used my method with their rifles have achieved similar success. The objective of this test is to extract the smallest groups possible from a chosen load combination. In my case, the ladder test is used to optimize loads for long-range (600-1000 yard) Benchrest competition, where ultimate precision is required. Though this process was developed for long-range Benchrest, it can be easily applied/adapted to shorter ranges, and to non-benchrest rifles and disciplines.

New Tricks — Enhancing the Classic Ladder Test
I have added a few twists to existing ladder-type tests that help establish the accuracy window rapidly with no ambiguity of test results. The first and most important modification is round-robin firing of the test rounds. That means one shot is fired from each test group before the second shot of any “group” is fired. Round-robin firing serves to balance out wind, light, and other atmospheric conditions by “spreading out” the conditions throughout the whole ladder-group. Basically, it creates no bias towards any one load because you won’t have one load fired in one condition and another fired in different conditions. In the final stage, all test shots are fired in the same time frame, testing 5 different loads simultaneously. This method also seems to address the psychology of shooting, and eliminates a problem that most people have. There is no anxiety as you try to make that tiny 3-shot group into a tiny 5-shot group. You only have to concentrate on firing each shot consistently, because the ladder-group will look like a mess until you get close enough to see the colored holes (prior to shooting, I color-mark the bullets as explained below).

Round-robin firing has been used by others, but not in this same manner. Most of the round-robin fired rounds in my method are shot at the same point of aim (POA) instead of shooting each group at a different target. This requires only one setup of the rifle on the sandbags, so the rifle/sandbag/shooter relationship (angle/contact area/shooter position) is kept as identical as possible between all shots. The rifle doesn’t deviate from its initial setup to shoot subsequent groups. This consistent gun placement helps remove one variable: inconsistent shooter and/or rifle positioning within and among groups. Throughout each stage of testing, this process will result in 10-30 shots fired at the same POA. 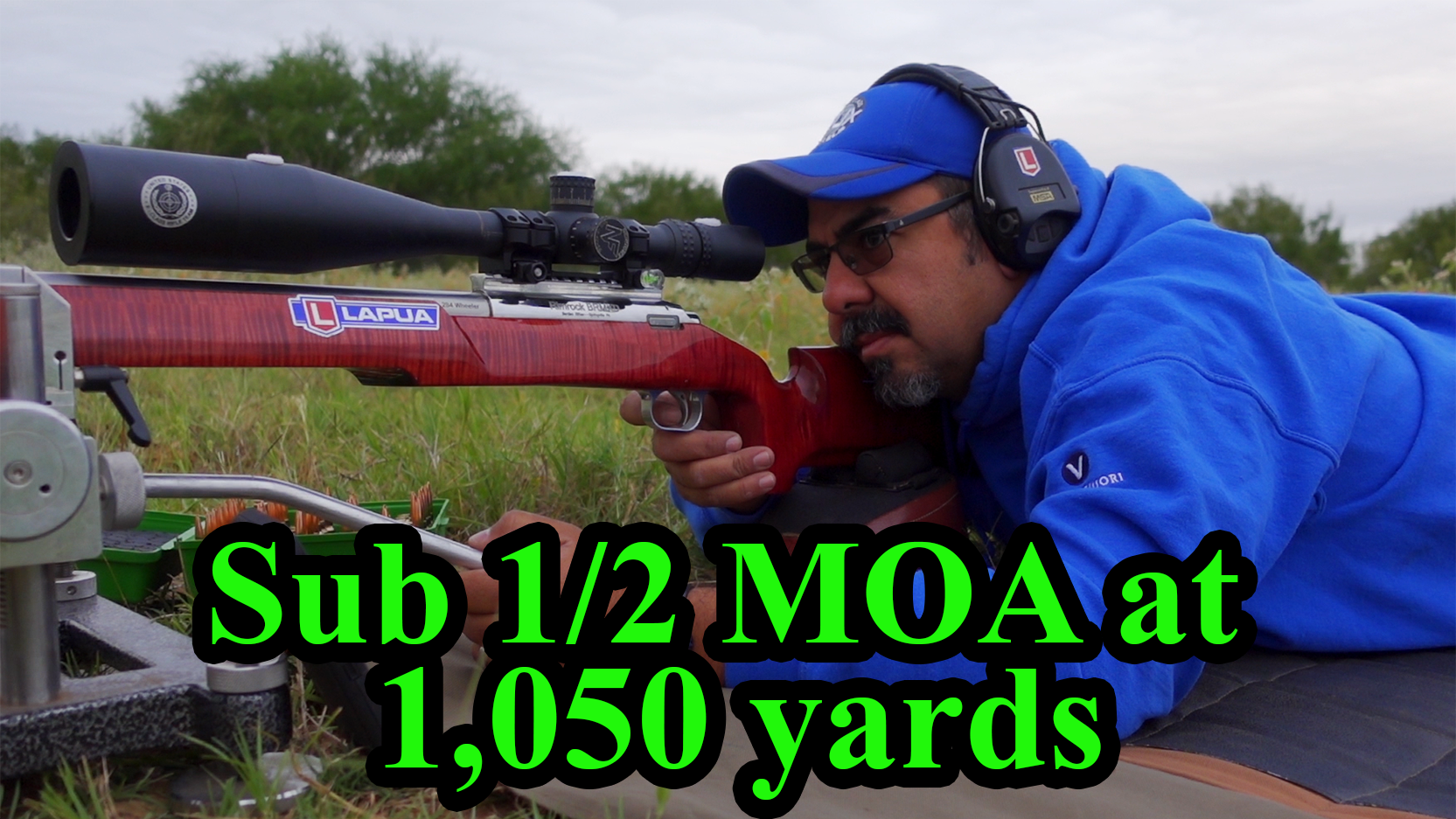 Editor’s Note: In this article, Jason Baney explains methods that can help long-range competitors shoot smaller groups, and test more efficiently, saving on components and barrel life. Jason is one of the top shooters at the Williamsport Club. In 2006, shooting a 15.6-lb 6BR, he won the Heavy Gun Division at the Williamsport World Open. Jason describes his Ladder-Test system for finding the optimal load for long-range matches, i.e. the load with the smallest vertical dispersion. With loads validated by ladder-testing, Jason has shot 4 of the 17 smallest 1000-yard Light Gun groups at Williamsport over the last three years. Others using this technique have likewise had great results, in some cases cutting their long-range vertical in half. While the Ladder Test method is primarily used to divine optimal charge weight, it can also be used to find the best seating depth or brand of primer.

Introduction — Benefits of Ladder Testing
After several months of waiting on your gunsmith, your shiny new rifle is finally done. You have your dies and brass and youre ready to see what it can do. Now it’s time to get to work and find out what load that rifle likes to shoot. Load development can be very frustrating for many people depending on their methodology. It has been frustrating at times for me as well, as I have tried many different approaches over the past ten years or so. This article explains my most advanced and efficient method, which has given me the best results. It may even save you some money, components, and range time.

Does this process work? Absolutely. Using my ladder-testing methodology, I developed loads that produced less than 2″ of vertical at 1000 yards (using Berger 105gr bullets) for three shots. CLICK HERE to check out my 1000-yard test targets.

Ladder Test Defined
What is a ladder test? A ladder test is, fundamentally, a method of testing a load combination using continuous increments while looking for a cluster of consecutive shots showing similar points of impact (POI). Usually the powder charge is adjusted incrementally while noting/tracking the point of impact variations in the vertical plane, and looking for plateaus on the target. The idea being that your best load will appear where several sequential, incremental charges impact in nearly the same place on the target. Basically you are trying to visualize a “sweet-spot” in the barrel harmonics by using the bullets impact on a target.

Welcome to WordPress. This is your first post. Edit or delete it, then start writing!